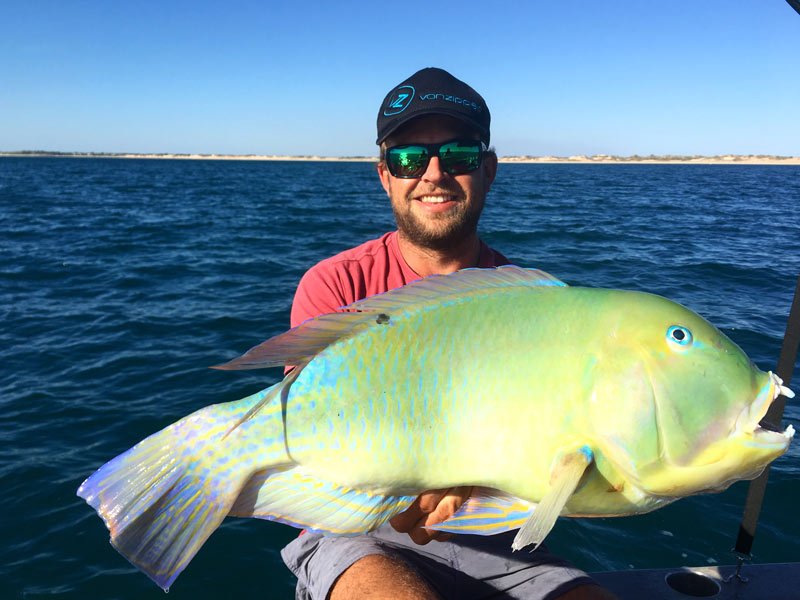 Disclaimer: There are lots of ways to target and catch Bluebone depending on the area you are in. We are only sharing what has worked for us. Feel free to experiment.

This is a guide on how to catch Bluebone

The Blackspot Tuskfish (Choerodon schoenleinii) also known as a Bluebone is a wrasse, native to the Indian Ocean and the Western Pacific Ocean. They look very similar to a Parrot fish but can easily be distinguished by their teeth.

Reaching 100 cm in length, the greatest published weight for this species is 15.5 kg. The legal size for a Bluebone in Western Australia is 40 cm and Queensland 30cm. A recent study has revealed that Bluebone reach these sizes around 3 to 4 years of age with the oldest fish from the 257 recorded to be 18 years old.

Where are they found

This species lives on reefs, preferring areas with sandy substrates or areas of weed and coral growth or rubble bottom. It can be found in depths from 0.5 to 60 m, though rarely deeper than 20 m.

When can you catch them

Bluebone can be caught all year round but we catch more during the hotter summer months. The tides do not matter as much as some other fish, it all depends on the spot you’re targeting. Deeper spots are easier to fish on neap tides and during spring tide we fish the shallow spots.

Heavy tackle should be used when targeting Bluebone not only because they put up an amazing fight but also because the sharks are never far behind. We prefer spinning reels spooled with 80 pound braid on a heavy 20-25kg rod. We also use 60 pound fluorocarbon leader for our rigs because it is a little bit harder to see than mono. The type of hooks we use are circle hooks usually 6/0 – 7/0 sizes when fishing for Bluebone they are much more likely to hook the fish around the mouth area and making releasing smaller fish much easier and better for the fish.

These Fish can be very smart and sometimes tricky to hook. Thats why it can be hard choosing the right tackle. The smaller the hook, sinker and leader the more bites you will get, but if its a larger fish and there are a lot of sharks the chances of landing the fish are slim. 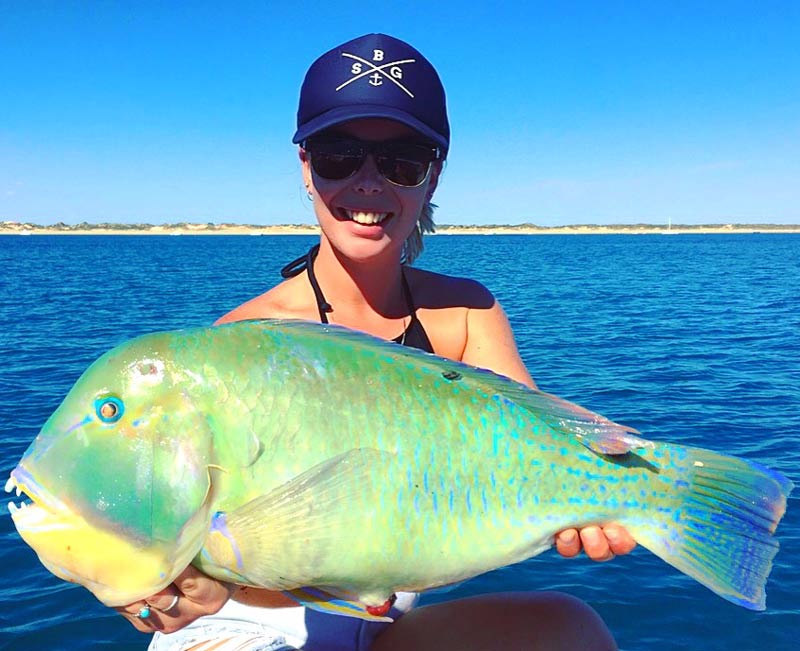 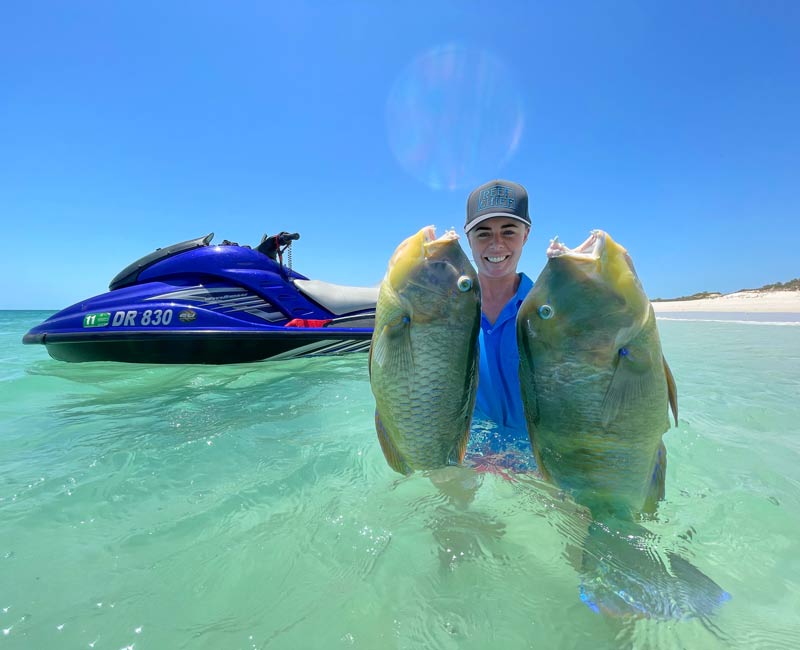 The two rigs we found to work very well for catching Bluebone are the paternoster and the running sinker. They both have their pros and cons but we usually use a paternoster which has an advantage of not getting snagged as much when fishing in a lot of structure. When a Bluebone bites a lot of the time it will crush the bait first to make sure it is dead then come back and eat it. This is why it is important not to strike or move your bait when you feel the bite we usually give it a few seconds before lifting the rod to hook the fish. 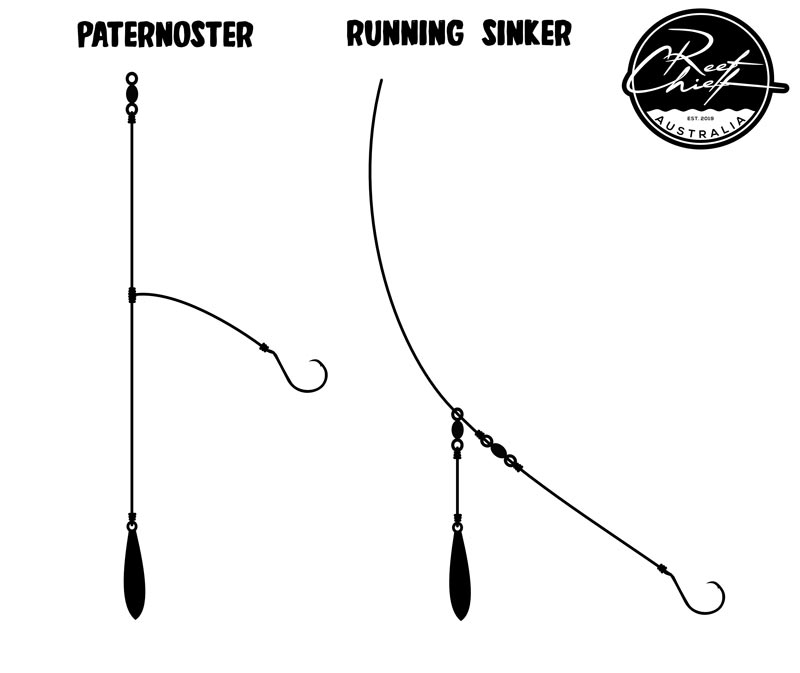 Bluebone can be caught on a variety of baits from octopus, squid, shellfish and a variety of crustaceans. The Baits that work well for us are prawns and crabs.

Using lures for Bluebone can also be productive. Anything from flies for flats and shallow water fish, to jigs and soft plastics in deeper water.

Both can be productive depending on the tide, how much the water is moving and the type of bottom. After many years of fishing for Bluebone we prefer to anchor on a spot. Fish can spook easily and we believe we have better success with our baits being in one spot.

The Black Spot Tuskfish is a species of fish that has received great praise from anglers. This is not just because of its table qualities, but also because of its vibrant colours and the way they hit hard and fight dirty.

If you are looking to catch some Bluebone, you should know that they are highly prone to barotrauma when caught from depths greater than 10m. So we would not encourage catch and release in deeper water.

Bluebone are also a relatively slow-growing species than other faster growing fish. That’s why we encourage all anglers to be responsible about their take when fishing for this awesome fish.

Check out our Bluebone fishing shirt for your next fishing adventure. 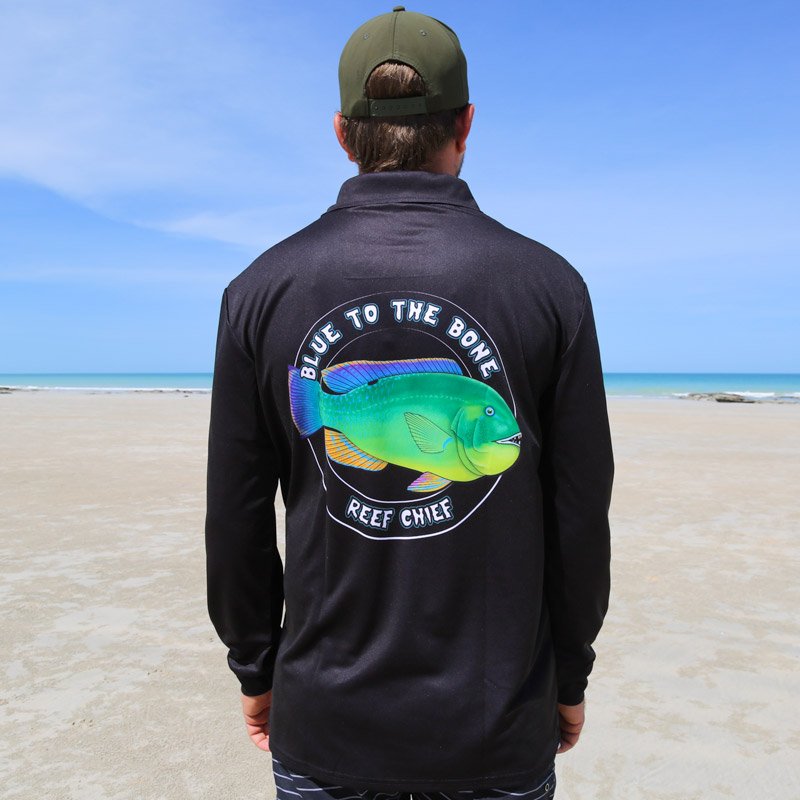